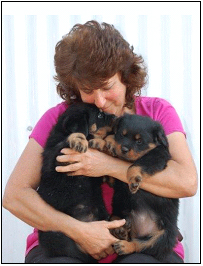 I will write here about natural breeding, fresh chilled semen and frozen semen and the best time to use each of these three options for your female. I get inquiries from people in the USA on breeding and they ask for frozen semen breeding. I tell them that they are close enough to do a chilled or natural breeding. Most people do not know the options, so we will break them down with the advantages and disadvantages of each one.

Natural breeding—this is the easiest and gives the most guarantee that the female will become pregnant. Testing on the fertility and the time when the female is breedable is still necessary for this and all other types of breeding. A natural breeding should be done on young females bred for the first time or on an older female where there is a chance of her not being as fertile due to age. Natural breeding is not as costly as the other two methods, but it does limit you to what stud dog is available. If you are one of the lucky ones who has a great stud dog living close to you, the natural breeding is ideal. But there are not that many great stud dogs left in the world today! The disadvantage to a natural breeding is with the stud dog and the owner. I talk to a lot of people who own stud dogs and am relieved to find out that they, too, worry about their male contracting a disease from the females who come in for breeding. Most people who own a female have no clue of the diseases that she may carry and give to the stud dog. When I asked my reproduction veterinarian, she scared me by telling me that there is a thick book on all the diseases that the female can give to the male. If it is an owner who is not up on research, they automatically think you just put two dogs together, they breed, and then we get puppies. But, the female must have tests done in order to deem her clean. So, what does a stud dog owner do? Many people are not familiar with doing artificial insemination; so, they are not as agreeable to use this method. But artificial insemination is the safest way to breed for the male and the most reliable to get a female pregnant. The ADRK requires a natural breeding to take place. But, when this law came into effect, diseases were not known, so that was not a worry. Their biggest concern is that the male and female who breed will be strong enough to carry the genetic trait to have the drive to breed. When you do a natural breeding, the male who is a lazy breeder and the female who has an abnormality in her vaginal canal, or other genetic trait, would also become extinct. But, the most important problem today is disease! I spoke to one stud dog owner and he told me when he does natural breeding, he takes a chance of his stud dog’s sperm count lowering because of a disease that is contracted from the female who came in for breeding. The ideal way to breed today is by artificial insemination. This also can increase the amount of puppies produced. If done correctly, the sperm will reach the eggs quicker and the sperm is more concentrated.

Artificial insemination—the next way of breeding is for the stud dog owner to collect the male’s semen, then ship it to the location of where the female is and do an artificial insemination. This involves buying an extender that will keep the sperm viable until it reaches the location where the female lives. The semen is collected and then the extender is added to the sperm and put into a kit which includes a cooler with ice packs and a few other components that will assist in the insemination. The sperm will stay alive for an average of 72 hours; but, it is recommended to get it to the female as soon as possible. It is shipped through UPS, FedEx or the airlines. Testing on the female is still required to find the maximum time of ovulation and an experienced veterinarian will usually do the testing and the insemination. The advantage to doing the breeding this way is that the female does not have to travel far and take chances of stressing her or travel accidents to happen. She can be inseminated at a reputable veterinarian that knows how to inseminate then she goes back home that day. This process is usually repeated twice for the security of the sperm being inside the female when she is most fertile.

Frozen semen breeding—this is the most difficult and most costly breeding. It should not be done on a female when you do not know if she can get pregnant or not, or an older female because she does not produce as many eggs as a young female. The timing must be done perfectly since there is a window of fertility in the female for only 12 hours and this is when the semen needs to be added into the female. Most veterinarians like to do a surgical insemination so they can place the semen right into the ovaries when the eggs have dropped and are present. But this means doing progesterone testing every day, then sedating the female and surgically implanting the semen. The other method is endoscopic insemination where the female is not sedated. Very few veterinarians are trained in this method and it is more difficult for sure to get the semen into just the right place in the female. This method of frozen semen insemination should only be done by a reproduction veterinarian that is qualified in frozen semen breeding. Frozen semen is collected and stored with additives to keep the semen alive and the inseminating veterinarian needs to know in detail how much and what additives the collecting veterinarian puts into the semen to freeze. If the receiving veterinarian does not know how much and what was used, the thawing method would not be successful and the female would not get pregnant.

Either way you breed your female, it should be done with a lot of thought in mind. You must think that if the female gets pregnant, then you would increase the quality of our breed and not do it only for monetary purposes. Smart and thoughtful breeding is costly and you should always select your breeding method and mate with the intention in mind that there is a chance that you can produce an improved generation that can be better than the parents.