The Phone Rings… I hear a frantic voice on the other end of the line; “We just don’t know what to do. We just got back from the vet’s with one of our three-week-old puppies…and the vet told us to put him to sleep, but we can’t do it. We just can’t…” Part VI

After a few minutes I was able to calm him down. I found out that the puppy was a three-week-old male suffering from severe seizures. They had just weaned him today with a mixture of condensed cow’s milk. The puppy would not eat from the mother and now the mother was continually pushing the puppy away from her. Boy, did this ring a bell in my head. This same thing happened to us last October. Our litter was progressing perfectly – almost too perfectly. The puppies looked great. They were gaining weight every day; everything seemed fine. Then we started to wean them at about three and one-half weeks of age. We don’t just all of a sudden take the puppies away from the mother. Rather, we do it slowly by building a little box in front of the kennel which allows the puppies access to the food in it but the mother cannot get to the food. Then, slowly, as the puppies desire, they wean themselves away from the mother. We have found that this creates a stress-free weaning process. But what happened in this particular situation is that one of the male puppies in our litter on his first day with supplemented food ate too much food too quickly and ended up with colic. The gas from undigested food began to build up in his little stomach and he began to panic. He ran all over the whelping box in circles, crying, then screaming. We tried to hold him but it did no good.
END_OF_DOCUMENT_TOKEN_TO_BE_REPLACED

The Phone Rings… …It’s time to take the puppies to the vet to dock their tails and remove their dewclaws. How do we know whether the vet knows exactly what to do? Part V

An incident happened when a female bred to our male had puppies. The owners took their puppies to their local vet to remove the dewclaws and dock the tails. When they got the puppies home they noticed the veterinarian had removed both front and back dewclaws, when they only wanted the back ones removed. They also noticed that the tails were much longer than they should be. They brought the puppies over for us to look at. I was astonished at the length of the tails. This was a veterinarian that was so sure of herself that she felt she knew what she was doing. The puppies again had to go through the stress of having their tails docked closer – finally, the correct way.
When you take the puppies in to the vet, it is advisable to bring pictures of how you would like the tails done. If possible bring in an adult so the vet can feel how close the tail was docked.
We prefer our tails to be docked very close, with almost no stump to show. Our veterinarian not only sews the tail but also uses skin glue to prevent it from reopening and becoming infected. Some mothers will clean the tails often. You must watch this to make sure she doesn’t remove the suture, or it becomes infected.
END_OF_DOCUMENT_TOKEN_TO_BE_REPLACED

The Phone Rings… …She is all finished delivering her puppies. The puppies are resting and she is exhausted! Part IV

Make sure she gets quite a bit to eat. Do remember she must feed all those puppies. She should now be on puppy food. Supplement it with meat and a milk substitute like Unilac, Esbilac, or goat’s milk.
A good mother will now be spending a lot of time in the whelping box. You should have your record book open to the first day. Each puppy should be listed: male or female, and the color of the collar around its neck. Do make sure you keep track of the collars so they do not fall off or get too tight on the pups. If you have a consistent litter, the collars are all that will distinguish one pup from another.
END_OF_DOCUMENT_TOKEN_TO_BE_REPLACED

The Phone Rings… …She is in her whelping box and the contractions begin. What comes next? Part III

Keep her quiet in the whelping box. She will pant and want to walk around the room. I had a litter last week and the female kept wanting to go up on the couch to have her puppies.
Make sure she knows what the whelping box is and that she must have her puppies in there. Some bitches have no problem at all delivering puppies; but there are some who are klutzes or have problems getting the puppies delivered.
END_OF_DOCUMENT_TOKEN_TO_BE_REPLACED

The Phone Rings… …It’s her 62nd day and she hasn’t had her puppies yet – what do I do? Part II

What is her temperature? It’s normal – it hasn’t gone down. You do remember me telling you to take her temperature twice a day until the 61st day? Then do it four times a day from now on until she has her puppies.
Has she lost her appetite? No, not yet, she has been eating twice a day like you suggested.
These phone calls are not always from a first-time canine midwife; even seasoned breeders come unglued when the time approaches. It definitely is normal to be nervous. I still feel this way before each litter. I go over my checklist making sure I have everything ready. I take her temperature more than I really should. I am up all night with a flashlight watching every movement she makes. This is what should be done.
It is important to gather the necessary materials together – before you need them. A simple checklist of items will include the following:
END_OF_DOCUMENT_TOKEN_TO_BE_REPLACED

The Phone Rings… …My female is starting to have her babies – what do I do? Part I 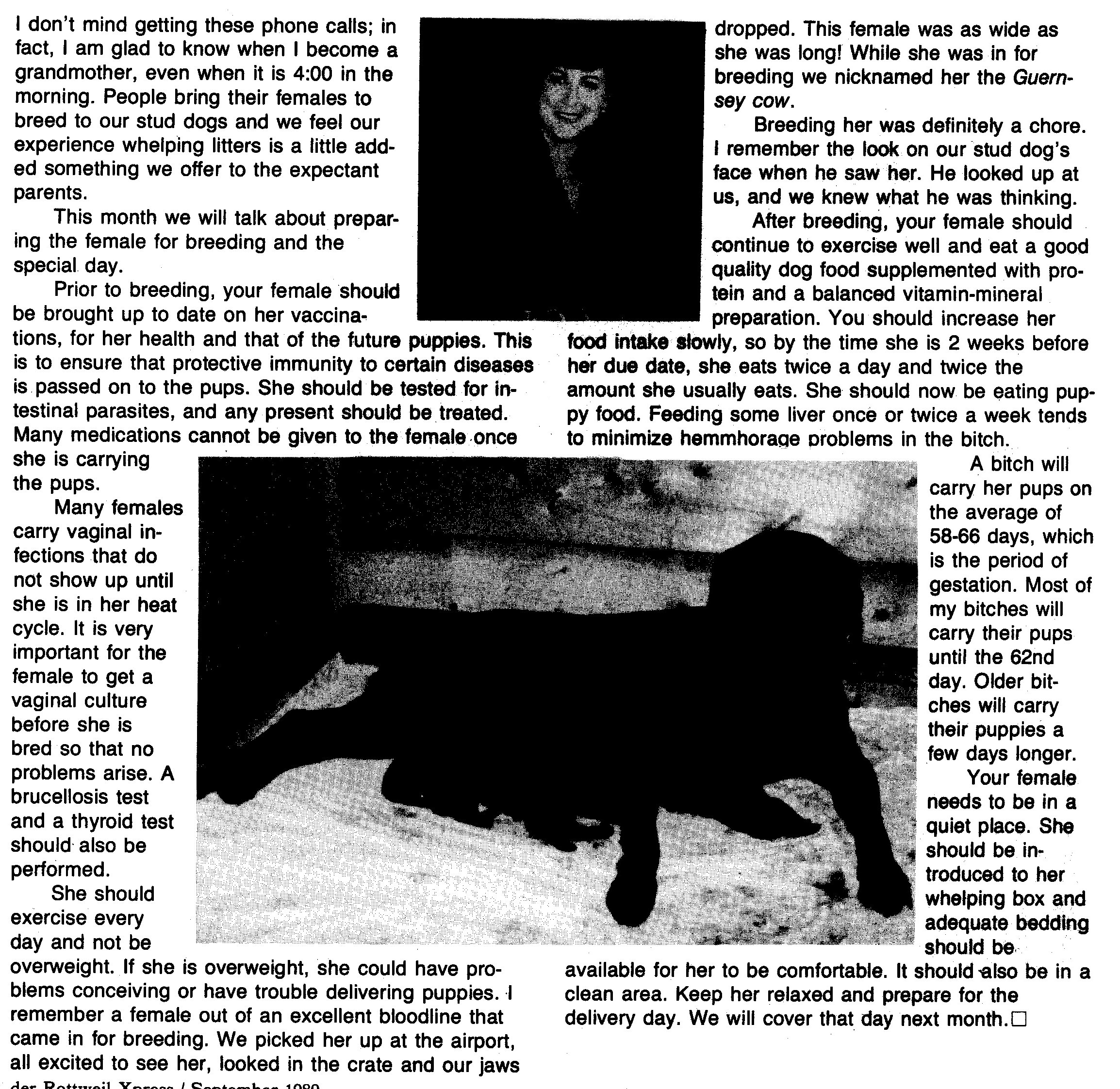 Many females carry vaginal infections that do not show up until she is in her heat cycle. It is very important for the female to get a vaginal culture before she is bred so that no problems arise. A brucellosis test and a thyroid test should also be performed.
She should exercise every day and not be overweight. If she is overweight, she could have problems conceiving or have trouble delivering puppies. I remember a female out of an excellent bloodline that came in for breeding. We picked her up at the airport, all excited to see her, looked in the crate and our jaws dropped. This female was as wide as she was long! While she was in for breeding, we nicknamed her the Guernsey cow.
END_OF_DOCUMENT_TOKEN_TO_BE_REPLACED

There is more to breeding then just a pretty dog. You must research the bloodlines. The most important issues are the health and strong genetics. If you love your breed, then it should be important for you to breed dogs with all health clearances.

END_OF_DOCUMENT_TOKEN_TO_BE_REPLACED 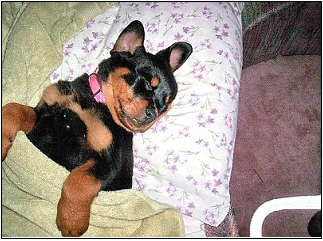 When preparing your home for your new puppy, you will need to think of the puppy as a new child. You should clean your entire home to make sure it is clean of any bacteria and virus. A good cleaning agent, or even bleach, will disinfect your home. Be very careful not to have cleaners around with your new puppy. You need to be very careful since your puppy will lick areas of your home that you do not expect.